For months now I have been following Ravita Pannu, better known as RP, on social media and admiring her work, recently I got the chance to be able to have a chat with her about the works she has done so far, her inspirations and much more. So here it is!

Ravita… you are an amazing make-up artist amongst other things – tell us a bit about yourself and how you discovered you wanted to follow this path as your career..

I started within the industry over 20 years ago I created my first bridal henna. I had natural flair and ability/skill so decided I would continue!

On and off with in the field set up small projects with other hair stylists and makeup artists but eventually I had enough of the lack of professionalism I found and decided I wanted to gain a recognised qualification for my skill and not be seen as a unqualified ‘mua.’ I then completed a diploma in make-up artistry and I have to say I have never looked back! So I started off getting creative with the green stuff, always was able to pin up hair and then completed the RP package with make-up. Believe it or not I also hold a BA honours in Criminal Justice and Policing

I LOVE life, work hard play hard and love to motivate others to enhance their lives. My daughter is my world, ‘Jumeirah’ named after one of the most beautiful places in the world, Dubai, I absolutely love it out there and my husband is my rock and best friend…I love my family and friends- they are the missing pieces and I love to look after myself by being a huge gym freak.

Who are your biggest inspirations?

I’ve been privileged to meet some amazing people over the years all of whom have inspired me; whether it be their creative flair or their business directive thoughts. I’m a great believer in either those that enter your life is either a lesson or a blessing. Being a huge fan of makeup artists all over the world and would have a list as long as my arm if I had to name all of them- they all inspire me daily and encourage me to try new techniques, styles and colours!

However cliché as it is, from early childhood my mum has been the one to really make an impression on me and shape my thoughts and ideas of now. Working ridiculous hours to ensure we never went without, creating a huge sense of aspiration of ‘reach for the stars.’

You work with magazines such as Asiana and have created some beautiful looks for celebrities such as Noreen Khan – how do you feel when you see these completed looks?

It’s a massive achievement to have your name associated with such a leading magazine! It’s amazing to be a part of the process knowing that your work is featured in such a high end, industry leading, and glossy magazine! The look on my family’s face the first time that they saw RP featured was priceless- to be honest it almost knocked my socks off. However commitment, dedication and passion led me to creating and featuring for Asiana- a relationship which is here to stay! I love being a part of the various features always pushing myself to get even more creative.

I anticipate some amazing new projects for 2014 and am already getting excited thinking what an amazing year it’s going to be for me. I’ve created a fair few celebrity looks but for various reasons have agreed that I wouldn’t disclose the imagery or whom I’ve worked with, however Noreen is now a regular RPdiva and is often RP’d for her many glamorous events! It’s like doing make for your bff with Noreen. I’ve always kept my feet firmly on the ground with celeb makeovers however it’s a pleasure to see pictures of them in the social domain and I smile thinking I was a part of this. 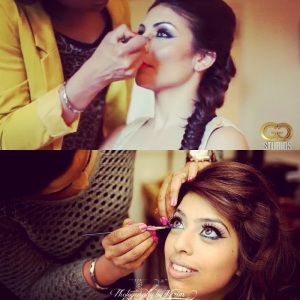 RP is a brand in itself – how does that feel and how did you go about creating this brand?

I never set out to create a brand as such, however the more I got involved, the more I would sit and talk with friends and it made sense. It’s an amazing feeling with clients quote the following like ‘it’s an Rpworld’ or I want to be ‘RP’d’ or I can’t wait to be ‘RP’d.’ I love the fact that RP is a brand and is recognised by so many! I actually sometimes like to take a step back and look in and almost overwhelming in how far I have come over the past few years! It’s a #RPWorld!

You get a number of artists passing your work off theirs and replicating your style – does that annoy you and how do you address this?

I don’t mind others replicating- that’s where I as RP inspire the other amazing makeup artistes or those breaking out into the industry! However yes I have had on many occasions, images stolen and that’s a whole different ball game! I’ve had one occasion a ‘mua’ show me images of my own work and rather than challenge the artist, I merely sent her a formal letter.

I’ve also seen my work advertised in shop fronts; I nearly crashed my car! On one hand I almost felt like it was a huge compliment, on the other infuriated that a so called high street business would create false advertisement for their clientele. I think the Facebook followers made sure this particular mua made sure my images were taken down-however I did visit them also!

Your mehndi style is so unique and desired by so many brides – how did you come up with this style?

My henna has come such a long way…I still remember my first  bridal henna creation over 20 years ago, however I take great pleasure in viewing artists’ works such as Kiran Sahib, Riffat and international henna artists. However industry specialists such as Kiran encouraged me so much and gave me so much advice it’s proved in my work! My style, almost reflected by the mood I’m in. If my bride says get creative, I let my inner artistic skill do all the hard work, I merely just hold the cone. I use so much for inspiration it’s unreal!

Ravita, you have just launched a collection of bindis; have you got plans to expand the collection?

How amazing are the RP Diva Bindis!? The RP bindi is merely the beginning, all I can say is watch this space!

Is there a dream person you would like to create a look for?

To be honest, there are numerous numbers and names of people I would love to create a look for, and I think some of these would be the likes of Kim Kardashian and Nicole Scherzinger. In Bollywood it would be one of the more classic faces such as Hema Malini and would Love to create a glamorous look for Sofia Loren, her look, features and presence is AMAZING!

What is next for RP?

There is SO much happening for 2014- lots I am excited to reveal but as my followers now know I let them know first via the RPworld of social media. However January 2014 will be massive for RP with a huge secret to be revealed on Christmas day! So you better stay in touch with RPworld!

I’d like to thank Ravita for taking time out and talking to me and I can’t wait to get Rp’d myself one day!