Lalit Modi, the chairman and commissioner of the Indian Premier League, has been stripped of all his posts in Indian cricket and suspended by the Board of Control for Cricket in India after a fortnight of controversy.

Modi has been accused of a wide range of financial impropriety, from rigging bidding deals related to the IPL, offering bribes, betting and money laundering.

Time ran out for Modi soon after the Chennai Super Kings had upset the odds and beaten the table-topping Mumbai Indians by 22 runs in the IPL final. An email sent from board headquarters across town in south Mumbai informed him of his suspension and the papers were served by one of the few leading board officials to attend the game.

Shashank Manohar, the BCCI president, N Srinivasan, the secretary whose India Cements own the Super Kings, and Niranjan Shah, the vice-chairman of the IPL, all stayed away. “While we rejoice and celebrate the great success of the IPL season, the alleged acts of individual misdemeanours of Mr Lalit K Modi have brought a bad name to the administration of cricket and the game itself,” Manohar said. “I have waited for the IPL to conclude to respond to the situation as I did not want the event to be disrupted in any manner.”

Having come from relative obscurity to become a board vice-president in 2005, Modi, who denies any wrongdoing, quickly became master of the game’s new order, heading both the IPL and the competition envisaged to be its big brother, the Champions League.

Modi, who has 15 days in which to respond to the allegations, said: “We have had some off-field unpleasant dramas only based on innuendo, half truths and motivated leaks from all kinds of sources. I assure you all decisions have been taken jointly by the governing council. Still, as the leader of the team, if there is any flouting of rules or any other financial irregularity, I will take full responsibility.”

If Modi’s initial response is “unsatisfactory”, a motion will be passed to strip him of all powers at the BCCI’s working committee meeting on 2 May. This will need to be ratified by the full council.

Manohar, the Nagpur lawyer who is close to Sharad Pawar, the ICC’s president-elect, is favourite to take over from Modi, though a committee is likely to be named to ensure that no individual is vested with as much power as Modi was.

On the field Suresh Raina’s blistering 35-ball 57 (he was dropped on 13 and 28) allowed Chennai to plunder 88 from the final seven overs and Mumbai’s chase fell apart once Sachin Tendulkar was caught at long-off for 48. They also blundered by sending Kieron Pollard in at No8, by which time eve 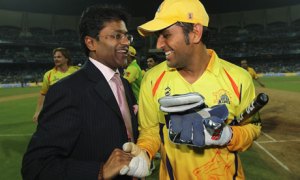 n his extraordinary big hitting could not save them.